Hey everyone, I’m catching up on some of the lessons I’ve missed over the semester (no better time to do it than when I can use the free wifi at uni!).

The topic of maps accurately depicting reality reminds me of something I read recently about American students not realising that the world map looks like this in every other country because the maps that are used in American schools look like this (Chopping Asia in half so that America can be in the middle!).

I had a bit of fun with http://thetruesize.com and used it to compare where my parents are from (Syria and Lebanon) to where they currently live (Melbourne, Australia). 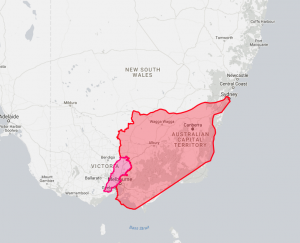 (Syria is red and Lebanon is pink)

The True Size is a really cool programme but I wish it allowed users to map states in Australia, or islands. Specifically so I could see the size difference between Canberra and some islands that I want to visit, or live in. Whichever I can afford first.

I also created my own map in Google maps; I started off in Syria and Lebanon again and then mapped out where all my immediate family are around the world.

I thought the idea of georectifying Australian maps was intriguing but I couldn’t really get it right (despite the steps being written out for me!).

This lesson was mostly* enjoyable because it got me thinking about things I previously haven’t given much thought to, and it brought up the story of the random Kansas farm which was unusual and different. The lesson gave me a better understanding of maps, and how complex they are.

*mostly enjoyable but frustrating when I couldn’t get certain things to work for me.