This week we looked at using technology as a means of identifying visual points of interest. Though a lot of the technical stuff would have gone over our heads, we looked at how it’s been used in digital heritage.

We looked into the differences between facial recognition – being able to match a face with a database of faces to find its owner – and facial detection – a computer simply finding a face in an image.

A computer program that is able to identify faces in images was also looked at. OpenCV scans an image to search for elements that resemble facial structures and form that assesses the identified, or ‘marked’, area as a whole to see whether it matches up.

I finally made that Twitter account to play around with Vintage Face Depot, a Twitterbot by Tim that replaces your face with the face of someone from Trove’s digital collection. Though I wasn’t too keen to try it out on my face (I’m quite camera shy), I did test it out with Bernard Black from Black Books. As it turns out Face Depot doesn’t work if the image sent to the bot has a cigarette in someone’s mouth, but I did give it another go and here’s the result: 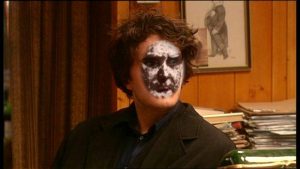 and here’s the failed attempt: 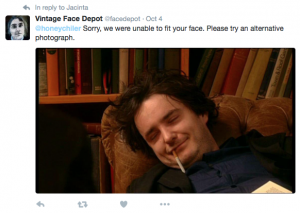 I thought it was fantastic that the bot also tweets the page where it got the image from because it evokes a bit of curiosity about who the person was.

We also got to play around with Face++ and IBM’s visual recognition service. Face++ felt a tad creepy (Black Mirror, anyone?) but I enjoyed playing with IBM’s visual recognition demo. I feel like there’s a lot you could do with it if you’re technologically literate, especially with heritage. It would be fantastic if art could be uploaded and sorted to create an app that identifies artistic styles!