Redaction Art – I really want to know if the requirement to redact certain information created these blobs or if the emergence of a creature or object shaped the redaction (a chicken or egg question!). These images reminded me of the Rorschach test used by psychologists. I got side tracked trying to find out what inkblot tests are called and found this weird online inkblot test. http://theinkblot.com/ (do not be tempted. Once you start, you will have to finish! )

It was entertaining playing around with the Vintage Face Depot. I posted the following picture of my daughter. The face applied looks like an antique mask but check out the spooky little face on her arm. 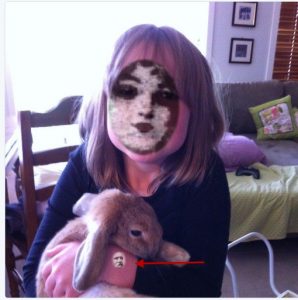 It appears that Facebook, Google, IBM and probably many other companies are moving forward the development of facial recognition software at an alarming rate. It will not be long until concepts explored in the television series “Person of Interest” https://en.wikipedia.org/wiki/Person_of_Interest_(TV_series), are a reality. In this show, people are tracked using facial recognition via street surveillance cameras. This is a rather scary prospect, following the ideas presented in this show using cameras in public places and no doubt images included in social media our movements could be tracked most of the time. It is interesting to consider that France has just banned facial coverings https://en.wikipedia.org/wiki/French_ban_on_face_covering . This article talks about how as a society we rely on facial recognition to identify people. You have to wonder if some governments are already using computer facial recognition to stalk us.
As facial recognition software improves, it could be used to identify new imagery of historic people. For institutions with limited funding, it could be applied to previously undescribed images. However in historical terms there might be limited application, given that photography has a been widely available for only about the last 130 years. Perhaps, in time it will be possible to identify people in creative works.

As discussed in class, when the National Gallery of Australia was looking for a Digital Asset Management System (DAMS) to manage their images and other media assets, the tender documents describing requirements included facial recognition. As I understand it, they hoped that their DAMS would be able to automatically catalogue images of people via facial recognition, thereby reducing data entry. They have since implemented a system known as Diva (this might be an Oracle product). I am not sure if their notion of facial recognition has been successfully implemented.